Its roof has been home to two honeybee hives since summer, and a hands-on educational display about bees in the children’s section will be unveiled at the “Bee Jubilee."   The event features bee-themed live music by local band “Corner Laughters” and honey-flavored snacks will be offered.

The “Bee Wall Interpretive Center” will educate children about the various types of bees, their life cycles and how they collect pollen. The center also includes a cabinet full of books on bees, beekeeping tools, samples of dead bees and a screen will live stream footage from the inside of the rooftop hives.

“Bees are important to our society because one of every three bites of food we eat is produced by honeybees,” said beekeeper Kendal Sager, who manages the library’s bee colonies. Humans also rely on honey and beeswax for various household products, including lotions, lip balm, soaps and furniture polish, Sager said.

Bees typically don’t generate much honey within the first year, said beekeeper Kendal Sager, but she did manage to harvest a modest 40 pounds of honey in September — one hive can produce up to 150 pounds in an especially productive year, she said. The honey from the rooftop hives will be for sale starting Feb. 5 in the library’s store — 6 ounces are priced at $10.

And in the next few months, the library will offer bee-related programing for both children and adults.  “People are really excited about the bees, there’s something about this that’s unique — I don’t know of any other libraries that have gotten into beekeeping,” said librarian Jenny Barnes.

Bees arrived at the library after the Beekeepers Guild of San Mateo successfully convinced the city to change its beekeeping rules to make it easier for residents to host them in their backyards. 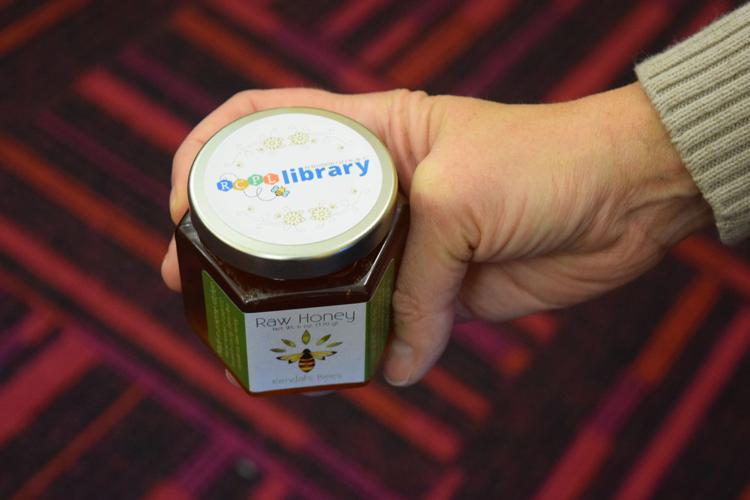 “Some people from the library said they love the idea of bee education and we should do something at the library and we were totally into that,” said Sager, who is also the secretary for the guild.  And the library wanted to help with declining bee populations, Barnes added.

Sager checks on the bees once a month, creates additional space for them if need be and splits the colonies in the spring time — a practice that can generate additional bee colonies. She also begins harvesting honey in the spring. One individual box from a beehive can weigh as much as 50 pounds when it’s full of honey.

“I have to walk through the teen room in my full bee suit to get to the bees and I often get a lot of looks,” she said. “The library staff is always so excited about the bees so whenever I come to check on them they always ask ‘how are the bees’ doing.”

Right now, they’re not doing much and it’s possible many of them have died, in which case Sager will replace the hives with other bees from one of the 30 other beehives she manages throughout the Peninsula.

“We usually see losses between October and January,” Sager said. “Keeping bees healthy is a big problem [everywhere] and there’s no vet you can take them to.”

Sager said the latest research suggests mites are responsibly for dwindling bee populations as they infect bees with lethal viruses. It’s possible to breed bees resistant to those viruses and there are medications for bees as well.

“Finding the right sort of treatment has been what a lot of research is focused on these days,” Sager said.

During the summer, the library’s two hives could be home to as many as 120,000 bees. Queen bees can lay as many as 2,000 eggs a day at peak production and bees can forage up to 7 miles from their home, though they prefer to stay near home, Sager said.