by Jodi Heckel, courtesy of University of Illinois News Bureau

Travis McDade, the curator of law rare books at the U. of I. law school, wrote a recently released book about the crime spree. “Torn from Their Bindings: A Story of Art, Science, and the Pillaging of American University Libraries” was published by the University Press of Kansas. It is the fourth book by McDade, whose training both as a librarian and a lawyer gives him a unique perspective on rare-book crimes.

Robert Kindred ran “the art world equivalent of a chop shop,” McDade wrote, cutting prints from academic libraries across the country during the summer of 1980. He was caught at the University of Illinois and prosecuted for the crime in central Illinois. 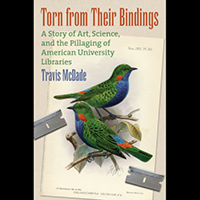 Academic and public libraries were particularly vulnerable to thieves like Kindred, McDade said, especially in the ’70s and ’80s, when libraries invested little in preserving or protecting their rare books. Thieves could easily sit in a remote corner of a library and cut illustrations from such books undetected.

McDade first learned of Kindred’s thefts in 2008 while preparing to teach a class on rare-book crimes. He remembered purchasing some inexpensive antique prints being sold by the University Library when he was in library school at the U. of I. He bought four prints at $5 each, and on the sales receipt was a note that the prints were recovered from a theft. The prints were not among those stolen by Kindred – they were recovered from a different theft – but McDade began looking into rare-book thefts and found Kindred’s story fascinating.

Kindred – who grew up in Villa Grove, Illinois – and an accomplice, Richard Green, broke into the University Library through the window of a first-floor men’s restroom. Kindred entered the library stacks, found the books he wanted to steal, tied them with a nylon rope and lowered the bundle out an eighth-floor window to Green, who was waiting below on the low roof of an adjacent building.

Unfortunately for the thieves, a maintenance worker arrived to check on the library’s air conditioning system and found the first pile of stolen books – a three-volume set of 19th-century lithographs with scenes of the Middle East and an 1832 book of illustrations of Italy – just as Kindred was in the midst of lowering a second bundle of books out the library window to Green.

“There’s this nighttime maintenance guy who stumbles on this crime. There’s this heart-pounding scene of these guys running across the street, hiding the items and getting in the car. And you get Kindred coming back to the scene of the crime, for reasons I can’t figure out,” McDade said. “This never happens in book crimes. There’s never any excitement.”

The book also highlights the painstaking work of the U. of I. librarians who sorted through thousands of stolen prints recovered from Kindred’s car and tried to determine what they were and where they might have been stolen.

“There’s these two librarians in the police station trying to reverse-engineer what happened. It’s this quiet-but-heroic effort by these guys,” McDade said.

His interest in this case arose not only from its connection to the U. of I. and Champaign-Urbana community, but also because Kindred was prosecuted both at the state and federal levels – a rarity.

Kindred was prosecuted for theft in Champaign County and received probation, to the disgust of the librarians who had spent months helping determine the value of the stolen items. But after another prominent library theft that included items from the University Library, the FBI’s interest in Kindred was renewed – he was prosecuted in federal court for interstate transportation of stolen property and sentenced to five years in prison.

“In my research, the federal prosecution of these crimes has really been the hero. The U.S. code takes these crimes seriously in ways that state codes don’t, and they punish these crimes accordingly,” McDade said.

He researched court records for both the state and federal cases, U. of I. police records and newspaper articles, and he interviewed many people involved with the case, including librarians, police officers and, finally, Kindred.

After years of research and work on the book, McDade tracked Kindred down and called him. To his surprise, Kindred was willing to talk, although not about the details of the thefts. McDade asked him about who he was and how he got to that point in his life.

“He was nice and gregarious and talkative, and remembered all these things,” said McDade, who had a complicated response to Kindred.

“Kindred, while a villain to me, is also this guy from east central Illinois who had a rough childhood. I tried to put myself in his position, and I thought, this was a guy who found himself in a position to be a success at something. He’d never been a distinguished guy, and he was all of sudden in a position where he was good at something. He was making money. People were paying attention to him. He was a success. That was a powerful motivator,” he said. “I understand how he got to that place, even if I don’t like him.”

Since Kindred’s crime spree, many of the books at the University Library that would be susceptible to theft have been moved to the rare-book stacks or to an off-site storage facility, McDade said. Other academic libraries have followed suit, but “across the country there remain really nice books in libraries that are vulnerable,” he said.

Unfortunately, many of the valuable prints have already been stolen from them, he said.

“The heartbreaking part of this is the looting and destruction of all these gorgeous books,” McDade said. “ I went to the library and looked at some of these books that had things cut out. It’s sort of visceral when you open a book and expect to find this gorgeous bird print, and you find nothing but a stub of where it was. It makes you angry.”