by Brangien Davis, courtesy of Crosscut

When Edwin Lindo was about 10 years old and growing up in San Francisco’s Mission District, his dad started taking him to a lively hole-in-the-wall restaurant called Radio Habana Social Club. “I’d spend hours looking at books there,” Lindo, now 31, recalls. “And all around me adults were having intense conversations: an Argentinian guy talking about the revolution in his country, a Peruvian talking about Che Guevara — everybody was talking about politics and art and books,” he says. “I loved it. That’s my goal for this place.”

This place is Estelita’s Library, a new book haven/conversation hub housed inside The Wine Station on Beacon Hill (WA).  (The space was formerly home to The Station coffee shop, which is now thriving in larger digs across the street, next to Roberto Maestas Plaza.) The tiny wine bar, open since October, already had a piano, a ceiling adorned with branches and birds nests (by Seattle artist Briar Bates) and a handful of tables. As of this weekend, it will boast newly installed bookshelves filled end to end.

Sporting a beard, a woven-cedar hat and a Cuban guayabera shirt, Lindo is friendly and easygoing. He graduated from the University of Washington School of Law in 2012 and now teaches race and law classes there. He has no previous experience running a bookstore or working in a library.

“I just love the idea of building community through knowledge,” he says.

Calling his new venture a “justice focused community bookstore and library,” Lindo has amassed a wide range of books (from his own collection and from various library sales) about matters of social justice, race, class, politics and the history of oppressed peoples.

“You’ll find books on Latinx identity next to a book about Harriet Tubman, next to Karl Marx, next to a first edition John Steinbeck,” he says, gesturing toward a packed shelf. Though some of the titles have Dewey Decimal stickers (“They’re really hard to remove!” he marvels), the books aren’t arranged in any particular order. Lindo hopes instead that people will make discoveries by proximity, or perhaps by suggestion from someone sitting at the next table.

With a Nicaraguan father and El Salvadoran mother, Lindo identifies as Central American Indio. His partner Estell is Black. He wants their 8-month-old Afro-Latinx daughter, Estella, to be surrounded (and eventually, engaged) by books that reflect the experiences of people of color. “This is her library,” he says.

Judging by the books, Estella is going to develop massive reading chops. A spin across the spines reveals The Autobiography of Malcolm X, The Shock Doctrine by Naomi Klein, Between the World and Me by Ta-Nehisi Coates and Fidel Castro’s La Historia Me Absolverá (History Will Absolve Me). There are books about Sacajawea, feminist history, NAACP’s 100 Years in Pictures, Malcolm Gladwell’s Blink, Ralph Ellison’s Invisible Man, poems by Maya Angelou and a few surprises, including The Great Gatsby, a book by Glenn Beck and the Chicago Manual of Style.

“I want people to find a book and come back here and say, ‘I want to talk with you about this book for two hours,’” Lindo says. “I don’t know if bookstores are profitable, but they bring community together.” 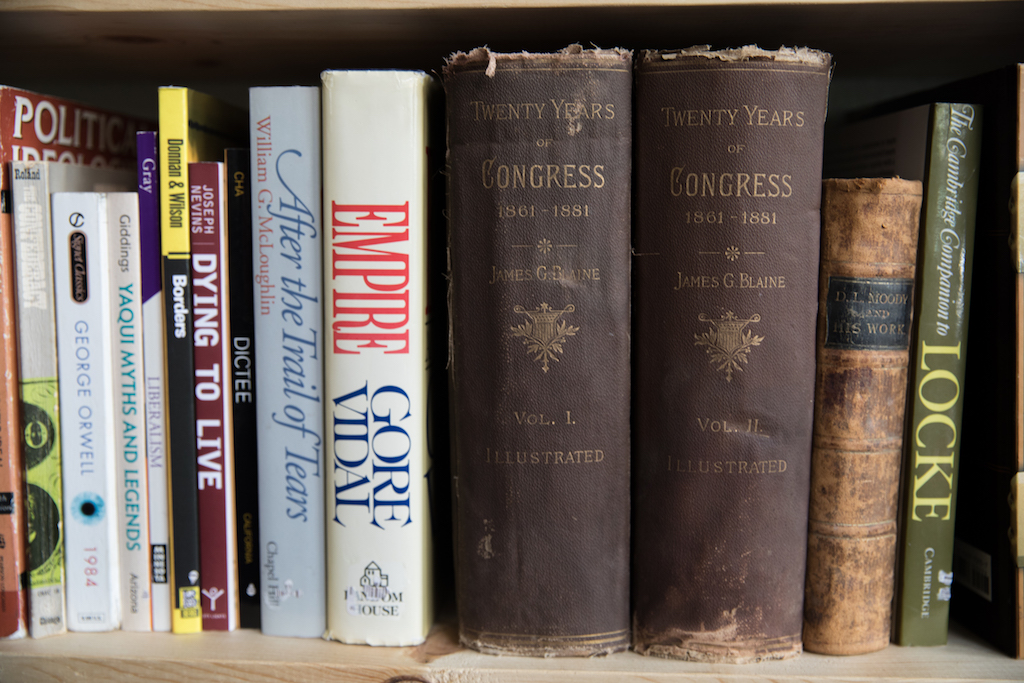 Lindo’s plan for checking out books relies on a library card app and a membership model. Details are still in the works, but it will likely involve a sliding scale, perhaps $30-$50 a year, that allows members to take home a book for two weeks. (He wants people to check out one book at a time “so you can really focus on that book!”) Through the app, a member can opt to connect with other people who’ve read the book. “It’s old-school, like stamped library cards,” Lindo says, “where you could see who else in your community read the book before you.”

The money raised from memberships and food sales on Saturday will go toward another one of Lindo’s projects: archiving, digitizing and publicizing all 467 issues of the hard-to-find Black Panther newspapers. He currently owns 100 issues, and has a line on 300 more (see his GoFundMe page for details). He plans to showcase a few copies at the opening this weekend, and more in the future.

“I thought it was a great idea,” says Luis Rodriguez, 40, who with his wife Leona runs both The Station coffee house and The Wine Station. Lindo approached him with the concept in March. “Talking about books over wine and coffee?” Rodriguez says. “It reminds me of something from the 1960s. There’s a very cool appeal.”

Lindo, a community activist who has participated in a hunger strike against police brutality and the protests at Standing Rock, says he was partially inspired to open Estelita’s by the engaged political dialogues he was encountering at The Station. “We have some amazing, intellectual conversations happening at the Station,” Rodriguez confirms. “I’ve been impressed to hear young people bringing up conversations our parents were having long ago.”

Rodriguez and Lindo plan to split the time in the space — the bookstore open during the day; the wine bar open at night. During the daytime hours, Lindo will remove the burgundy tablecloths and roll out a couple wheeled bookshelves with more reading fodder. “Anyone and everyone is welcome to come and explore the books,” Lindo says, “and read them while enjoying a tea.”

Once Estelita’s is up and running, Lindo hopes to partner with community organizations to offer a variety of classes, book talks and spoken word events. He wants the place to be as bustling as the Social Club of his memories — a place that sparks minds young and old. “This isn’t mine,” he says. “This is the community’s.”

Crosscut arts coverage is made possible with support from Shari D. Behnke.