Skip to content
Home » All Articles » More Than the Internet on Paper: Libraries in Milo Murphy’s Law

This is a guest post by Burkely Hermann, the librarian behind Pop Culture Library Review.

Libraries have become prominent in animated TV series in recent years, especially in all-ages shows. This includes Disney offerings like DuckTales, Amphibia, Big City Greens, The Ghost and Molly McGee, and Rapunzel's Tangled Adventure. One Disney program goes beyond these examples: the exciting sci-fi comedy Milo Murphy's Law. This 40-episode series is centered around Milo Murphy, who is a cyclone of calamity wherever he goes due to Murphy's Law. Anything that can go wrong will go wrong in Milo’s world.

Unlike its related antecedent, Phineas and Ferb, no librarians appear in Milo Murphy’s Law. Libraries still play an important part in the series, though, beginning in the Season One episode "The Math Book". In this episode, Milo, Melissa, and Zack venture after hours into the dimly lit school library, which has cobwebs everywhere, to retrieve the key in the science classroom. When they walk inside the library, Melissa remarks that it is "like the internet, but on paper." When Milo pulls a book with hope that it will open a secret passageway, a library shelf falls, a wall crumbles, and a passage is revealed, allowing them to get to the science classroom.

The library scene is short, but it’s similar to those in the animated series Hilda and Mira, Royal Detective, where characters travel through secret passageways from the library. Library stereotypes are common—Melissa’s comment makes the library appear old-fashioned and the library is a dark, uninviting place—but the library is still shown as a key place of knowledge, nonetheless.

Similar themes shine through in the episode "Missing Milo," where Milo, Dakota, and Cavendish travel to the future where they consult a library to learn what allowed mutant pistachios (Pistachions) to take over the world and enslave humanity. The episode shows the library as a crucial repository of knowledge. The scene reminded me of Vox, the librarian in the 2002 film, Time Machine, who is the heart and soul of the film.

The episode, "Backward to School Night," finds Milo, Zack, and Melissa having to take on adult responsibilities to care for their parents, who are running wild like children. It features a scene where Melissa reads to the kid/parents in a makeshift storytime. When the storytime ends, the kid/parents grow increasingly impatient and run around with boundless energy, causing the library shelves to collapse.

A lesson that librarians can take away from this scene? Do not make young patrons unhappy, especially during storytime. The episode also communicates the value of libraries as a way to teach stories to children, just as Amity Blight did when she read to children at the local library in The Owl House. 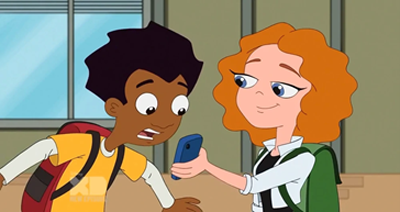 One Milo Murphy’s Law episode directly references libraries and cataloging, despite the scene in question not taking place in a library.

Depictions of cataloguing are rare for television, making this episode unique. Cataloging is vital: It involves creating metadata about resources like images, audio recordings, and books. It is further actualized in the role of cataloging librarians who prepare bibliographic records to represent library acquisitions and provide efficient retrieval and access for those accessing the catalog.

In "The Note," Milo reveals that Melissa keeps a record of all his adventures, making them "easier to catalogue." Zack is intrigued by this, so Melissa shows him her phone which has photos from all of Milo's adventures. It’s also revealed that Milo uses the records to keep track of how many unexcused absences from school he has during a month.

The photo gallery in Melissa's phone is likely nothing like a library catalog. It probably doesn’t contain image descriptions, since the metadata is in Melissa’s head rather than directly connected to the image. Melissa probably organizes the photos into specific folders, or even sub-folders, since she is smart but "sometimes a little scatterbrained." She is shown to organize her information succinctly, so the photo gallery may have the same attention to detail. Melissa even keeps a complete record of their adventures, along with other objects and data, to document instances of Murphy's Law that they experience in order to help Milo.

Libraries also appear in the Season Two episode, "Picture Day," when Milo’s friends try to take a decent photograph of him for the school yearbook. Amanda Lopez, Milo’s love interest, tries to take a photo of him in the library while using a fake library backdrop for her photos. Ever the perfectionist, Amanda justifies this by noting that her background depicts a "slightly nicer library" than the real school library. Milo's friends carry Amanda’s backdrop with them throughout the episode as they try to photograph him for his student picture.

While libraries don't have as large of a role in Milo Murphy's Law as in the Disney series, Elena of Avalor, the show still asserts the value and importance of libraries.